I have a new addition to the pets. Tuesday night (around 1 am) Connor texted me that he had a present for me. I went to the door (normally I am asleep by then, but I had Wednesday off so I was up. Connor was up because after work he went long boarding with his friends. He was not at the door, so I went back to my room. He came in a minute later with a rat, and was like "I painted one of your rats" I was like that's not one of my rats. They were longboarding, and saw what they thought was garbage. It was a hooded rat. So he brought it home to me, since I have 3 anyways. We named her Whiskey as she is a little wobbly. She seems to have a problem with her left hind area. It does not seem to bother her. She is also named Whiskey because it is in the phonetic alphabet and fits with the other three, She has lice so she is in quarantine in an aquarium for now. Does anyone have any hints on getting rid of lice in rodents? 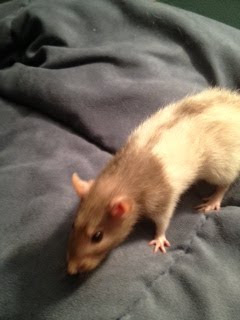 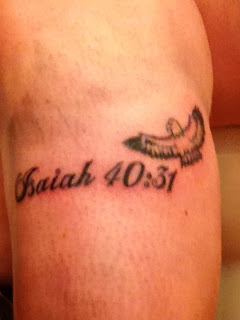 I seem to be having longer gaps of time between blogging...A lot has been happening. I got a new rat (so I have 3 now.) She is grey, and her name is Lima. They all get along, and are starting to get mischievous. They have a lot of energy, so I try to let them out to play as much as possible.

Connor got me a part time job in the kitchen at Boston Pizza with him, but it is closer to home, and I was really not enjoying working at Blue, so I quit there and am full time at BP now. I am having more time to myself, more time with my animals, more time to relax.

I was learning to snowboard, but since the hill is about a 45 min drive away, I don't go much. It was more fun than I thought it would be though.

I got a new tattoo the other day (my second) It is on my calf and represents my favorite bible verse.


But those who hope in the LORD will renew their strength. They will soar on wings like eagles; they will run and not grow weary, they will walk and not be faint. Isaiah 40:31

There is not much else that is new other than that. I am working about 5 days a week, 9-10 hours a day. They like me there. Connor was made shift supervisor. I am hoping to go to fan expo this year. I am going with dad to White Otter Lake Castle... That's about all I guess
Posted by Country Girl at 10:38 AM 12 comments: