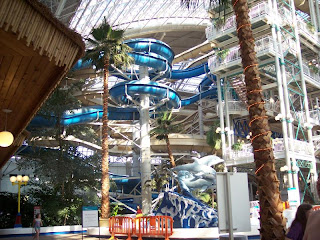 I went to Edmonton on Monday to drop Emilie off at the B and B that she was going to stay at so she could catch her flight on Tuesday. I bought a new pair of cowboy boots (mine were getting pretty bad), and we spent most of the day at the mall. We went to the water park, and even though the waves were not running that day, we had fun. Emilie managed to convince me to go on a water slide, so we went on the Blue Bullet. You have to jump in, then cross your arms over your chest and cross your ankles. Anyone that knows me knows I hate heights, and climbing up the stairs was very hard to do. At first when I jumped into the slide, I thought that I was going to have a Panic attack, but the second time I went on the slide it was better. We only went on the slides twice as there was a large lineup after that. We saw a bunch of people bungee jumping, and it reinforced that I never want to do it. After the mall, I took Emilie to the B and B and then drove back to Jasper.
Kat
We have been over run with mice and gophers at the barn this year, and our cat Short Tail has decided that he likes birds and being fed by the engineering staff better than catching mice, so Dave said we should go to the SPCA and get another one. They are overstocked, and were offering cats half off, but Dave said to go get one for free. Tonight Eric, Jaimie and I went to Hinton, said we wanted a barn cat, and they said they had a few on the list. The first one that came to mind was not spayed, so we took the next one. Barn cats are free, and they just ask for a donation. They said that if this cat did not work out that we could take her back and trade her for Brandy (the really nasty one that was the first choice). We renamed the cat, Kat, and she is in the barn now, so we shall see if this works out.
Posted by Country Girl at 8:20 PM

Quite an original name. No picture of the boots?

Funny how some barn cats decide they no longer need to catch their food. I have 13 cats in the barn and I think only 3 hunt. They bring the mice home and give them to the others and off they go again.