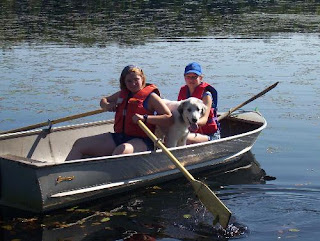 This is a memorial note for Tundra.  He was the first dog that I actually picked out and remember training.  He was a Great Pyrenees (big white dog breed).  He was a very loveable dog, he went canoeing (not very well), swimming, and would play with us.  He would let the kids climb all over him and never blink.  Then one day, he jumped up as a kid was bending down and scratched him, then a crazy woman accused him of jumping over three gates to attack her.  (She was shoving her kids in  a drainage ditch.  He is a herder so he went to protect the kids)  Anyways while I was gone at camp, my parents gave him away to friends with a farm.  I got to go and say goodbye to him before college, then I never saw him again.  I heard a few stories over the years, but never  anything too bad.  I planned to take him with me if I ever got my own place.  The other day, my mom called and said she had bad news.  She told me that his new owners had found him, there were no wounds, no marks of any sort and they believe it was a heart attack.  He was only five and a half years old.  So this is a post to a good, but misunderstood dog.  :-(
Posted by Country Girl at 2:52 PM

Sorry to hear about Tundra. He was a nice dog.

I'm so sorry to read this story....I breaks my heart.