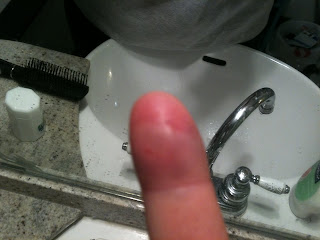 "Nation will rise against nation, and kingdom against kingdom. There will be earthquakes in various places, and famines. These are the beginning of birth pains." Mark 13:8

This will probably be my most controversial blog. I debated whether or not to even post this verse, but I decided to give it a go. I am not going all "doomsday" or "end of the world" on you, but am curious as to your thoughts.

There have been many more floods, earthquakes, wars, storms, tsunami's.... you name it, there are more in the last decade than ever before. Do you think this is "the beginning of the birth pains" or do you think it is that our media is more powerful than ever before, and we get more news of all these happenings?

In other news-I slammed my finger in my car door yesterday. It is red and purple, but the swelling is going down, and its not as painful anymore. The pic is not that great, but its the only one I have.
Posted by Country Girl at 9:29 AM

You know what I think! I have asked myself a lot since Haiti if the end is near or if it is just how global our society is and how linked we are now.

Personally, I think it's just that media is stronger, and our connection as a global community is more present than it might have been in the past. We're bombarded with constant tweets, FB messages, e-mails, news articles about international events, so it's no wonder that we're more attuned to them than we might have been even a decade ago. That's just my opinion, but it's safe to say that I don't put as much stock in worries about the end of the world as everyone else seems to. So many people seem so eager to believe stuff's gonna be going down next year! I have my doubts that if it happens, it'll be that soon.

It's an interesting thought! I've been thinking about the same, but we don't know the day our the hour Jesus comes. The most important thing is that we live with Jesus, walk with him and tell others about him.